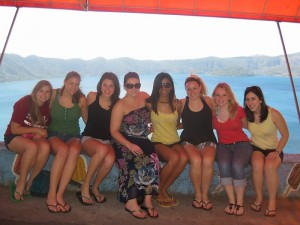 EWING, NJ… This winter break, eight nursing majors donated toothbrushes and other medical supplies, repainted a clinic, taught children about healthy habits, and gave vaccinations — and made a “world” of difference while doing it.

That is because these students spent Jan. 8 – 15 volunteering in El Salvador through coordination with The Foundation for International Medical Relief of Children (FIMRC), a national organization which focuses on providing health care for children in medical clinics in Costa Rica, El Salvador, Nicaragua, Peru, Uganda, and India.

The volunteers ― sophomore Colleen Rindt; juniors Amanda Blizard, Alison Lazzaro, Ankita Patel, Brielle Roller, and Kelly Thompson; and seniors Brittany Boyle and Nicole Feldman ― did all of their own planning and fundraising in order to volunteer in the country, where influenza, and other easily treatable diseases like bronchitis and diarrhea, can be life-threatening.

Now several months after their trip, the women describe the experience as eye-opening, and their story has touched the nursing community.

“I have seen pictures and heard amazing stories,” said Norma Brown, clinical learning resources coordinator and advisor to the Student Nursing Association (SNA) who helped the students plan the trip. “The fact that the supplies which the students took with them that had been donated by vendors and some purchased with money from SNA were so abundant that the facility needed to rent another van to transport it from the airport was just heart-warming.”

According to the women, while abroad, the FIMRC had them work in a clinic in the town of Las Delicias with a community health nurse named Morena, as well as in one of the country’s government clinics.

While in Las Delicias, Morena sometimes led them on hikes through mountains to all the isolated homes in the rural village in order to conduct door-to-door checkups and prenatal exams, administer medications and wound care (including several broken bones), and give vaccinations.

However, in addition to the mountains of El Salvador, the students overcame many other obstacles in order to make the trip a reality.

According to Susan Mitchell, assistant professor and chair of the Nursing Department,  while “a lot of students can do an international experience, (nursing) students are so bound by coursework, they end up being five-year or six-year students if they try” to go abroad.

Mitchell also explained that through the campus chapter, “whoever does the most fundraising gets to go, so there would have been no guarantee that all eight students could go.”

Intent on sticking together, the students “just decided to do it on their own,” she said.

After the students applied to FIMRC’s Global Health Volunteer Program, they were placed in El Salvador but were “ready to volunteer anywhere” that the organization put them, said Patel, SNA’s Director of Multicultural Awareness, who proposed the idea for the trip at a general meeting of the SNA at the beginning of the year. 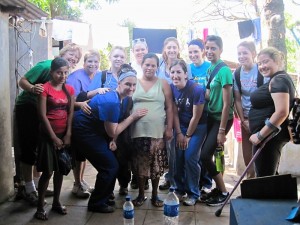 The students pose with local women.

While the FIMRC organized the students’ transportation, housing and meals, it did not cover the cost of the airfare and the program, $1,811 each. According to the students, the cost was partially covered by a financial gift from the College’s Delta Nu Chapter of Sigma Theta Tau International, the nursing honor society, in addition to gifts from family and friends. Also alleviating costs are the students’ joint fundraising efforts, including sales of T-shirts and Joe Corbi’s food, and a $1,050 contribution by the Student Finance Board.

The SNA also allocated $1,000 for supplies and donations — such as prenatal vitamins, soap and hand sanitizer, and medications to combat upper respiratory illnesses — that are urgently needed in El Salvador, said Lazzarro, SNA’s Director of Professional Development,

“They brought suitcases and suitcases of supplies, dentist contributions, lab-testing equipment, toothbrushes, mouthwash, Band-Aids. They even had little bears, stuffed animals that they gave to the kids,” said Mitchell, who spoke with some of the women after the trip.

According to the students, they hope that news of their trip will make other nursing majors realize that an abroad experience is a possible and fulfilling option.

“It would be great if this became an annual trip for nursing students,” said Rindt.  “Eventually, I hope that this trip can either be incorporated into a nursing course or somehow included in the nursing curriculum so students can receive credit from TCNJ.”

Lazzaro said that in addition to spreading cultural awareness, the students plan to use the trip to promote the College’s nursing department and encourage students to “step out of the basement of Loser Hall,” where nursing classes are located.

Patel added that the group plans on creating a poster to present at New Jersey Nursing Students, Inc. (NJNS) Convention on February 16– 17 to promote awareness of their trip.

Mitchell also said that Boyle and Feldman will be students in her public health class and will be presenting a project on their trip at the end of the semester.

“Brittany Boyle and Nicole Feldman who are seniors are using this trip as a way of demonstrating women’s health issues in really a third-world country,” she said.

Like several of the other students who want the trip to become an annual event, Roller said that, if possible, she would “definitely like to return to El Salvador in the future.”

“I had an amazing time and an incredible experience.  I would love the opportunity to work with FIMRC again because I was able to interact and learn from some amazing people,” she said in an email. “The wonderful interactions with the nurses and doctors involved with FIMRC made the trip that much more fulfilling.”

“Doing a medical mission abroad is a way for nursing students to gain clinical experience in diverse situations,” said Thompson in an email. “I am so grateful to have had this opportunity, and travel to a country that is not as fortunate as ours,” she added. “…I truly felt like our group made a difference in Las Delicias, and I can only imagine the impact we could make if we were registered nurses.”

For now, the students are happy to have seen their dreams of going abroad come true and to have used their College education to make a global impact.

“This is something I’ve dreamed about doing since my freshman year at TCNJ. I joined (the) Student Nurses’ Association and was elected the director of multicultural awareness during my sophomore year,” said Patel. “…We have learned so much in nursing school… It was time to embrace that knowledge and really make a difference.”

“Our trip expenses went directly towards supporting the clinic, and I like to think that our presence alone gave the community hope. It shows the citizens that people do want to help, and that those who are able to, will,” said Blizard.

Several women recalled one event in particular as the “most memorable.”

Arriving at a small house with an aluminum roof up in the mountains, the women were each quickly offered a handshake and a welcoming hug by an older man in the family about to receive their vaccines.

“They were excited for us to and help them prevent disease and care for them. It was incredibly gratifying to have a direct impact on the family and use the Spanish I learned to communicate with them,” Lazzaro recalled.

Top
Join us on April 24, 2020 as we celebrate the 50th anniversary of the School of Nursing, Health, and Exercise Science.Learn More